1. Insect behavior and especially its contact point with evolution, life-history decisions, physiology and morphology.
2. Learning in insects and its consequences for development and interactions with competitors.
3. Life history of insects and especially the effect of climate on growth, development and life span.
4. Any physiological or behavioral trade-off (such as between searching for food and avoiding predation).
​Current Research
​
1. The ecological value of learning in ants

Ants exhibit strong and diverse learning abilities. Putting it in an ecological and evolutionary context is rather new. We track learning behavior in the laboratory as well as in the field using the desert ant Cataglyphis niger as our model. We already demonstrated that ants learn to solve a maze in the lab and improve in maze-solving time within days and between days. Ants also forget to solve the maze after about two weeks. Ants also learn to avoid falling into pitfall traps simulating predators that ambush them. When ants are trapped, other nestmates often try to rescue them.

​We currently have three research projects:
(1) We study how learning to solve the maze contributes to the success of the colony under competition conditions with naive, untrained colonies. It is important to show not only that ants learn but the exact benefit of learning under more realistic conditions.
(2) We separate between the contribution of learning and motivation to solving the maze. Colonies can have a strong motivation to solve the maze (expressed as many workers searching or movement against the direction of the nest), yet show low learning ability, and vice versa. It could be that high motivation and enhanced learning are redundant and traded-off against one another.
(3) What triggers ants to rescue trapped nestmates? Do ants prefer to rescue specific trapped ants over others? Do they get better with experience in rescuing?

Manuscripts related to this project: 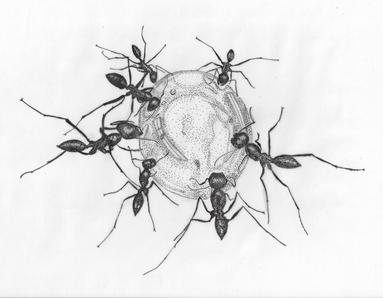 Ants feeding on honey after solving the maze (painted by Inon Scharf)
2. The unique foraging and habitat selection behavior of wormlions

Wormlions are flies of the family Vermileonidae, whose larvae dig pits in sandy areas. The pits are actually a trap, and the wormlion waits beneath the sand for small insects, mainly ants, to fall inside. Wormlions are not the only insects digging pits, and they exhibit a nice example of convergent evolution, together with the non-related pit-building antlions. Competing between the two rivals, that use the same hunting strategies and share similar habitats is a promising research direction. Furthermore, wormlions occur both in cities in high densities and in rural, more natural habitats, such as caves.

As said, wormlions prefer to construct their traps in shaded, covered habitats. However, if one makes the decision harder by interfering with the preferred habitat (either by adding small pebbles as obstacles or using shallow sand), this preference gets much weaker. The preference for shade nevertheless increases with increasing temperature. Our interpretation is that under cooler temperatures the threat by exposure to direct sun is lower.

Regarding wormlions in cities, we found that cities provide superior habitats for wormlions due to at least two factors: more suitable fine-grain sand that enable constructing larger pits, and the occurrence of many more small ants that serve as potential prey for wormlions. Finally, wormlions are attracted towards city walls. The walls provide them more shade, and perhaps also opportunities for hunting prey, as some species tend to follow walls when encountering them.

We are currently asking the following questions:
1. What are the considerations that wormlions take into account while choosing a site for pit construction?
2. What is the effect of intra-specific competition and competition with antlions on pit construction and maintenance?
3. How long do wormlions remember? How long is their behavior repeatable?

Recent manuscripts related to this project: 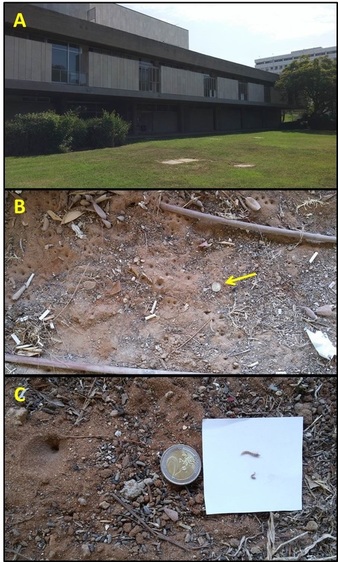 (A) The music academy at Tel Aviv University.
(B) Wormlions pits are abundant below the shade of the building.
(C) Two wormlions were pulled out of their pits and photographed
next to a 2 Euro coin. 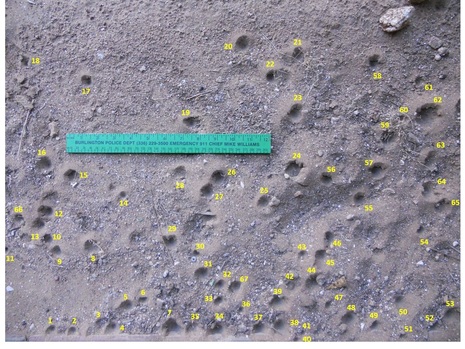 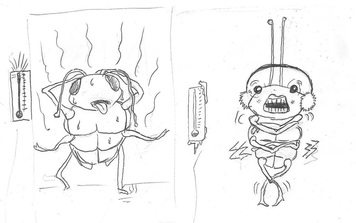 Painted by Adi Scharf
Stressors are everywhere in nature and animals rarely face their desired optimal conditions for long. We focus in our reserach on two important stressors: climate and starvation stress. We are checking how suboptimal temperatures affect development, body size and reproduction, and how repeated encounters with thermal stress affect performance. We also study the effect of continuous and alternating starvation episodes on insect performance. Finally, we test how well insects cope with several stressors in parallel, which is a more realistic scenario. Surprisingly, moderate stress can improve the insect performance, and we explore the conditions under which such a phenomenon takes place. For this research we mainly use the red flour beetle, Tribolium castaneum, as our model animal.

1. We separated between the effect of growth temperatures and adult temperatures on performance: flour beetles perform better at high temperatures, but short-term acclimation to lower temperatures improve performance under such conditions. Growing up under lower temperatures, though, does not lead to the same improvement under lower temperatures. In other words, short-term acclimation was evident, but we could not show a contributing effect of long-term developmental acclimation.
2. We showed that repeated cold stress led to impaired performance, reflected in reproduction-related activity and searching for food. However, cold stress led to accumulation of more body fat and to longer starvation tolerance. We suggest that following cold stress the flour beetles entered an "energy-saving mode", which enabled them to generally cope better with stress, at the expense of other activities, such as reproduction.
3. We demonstrated that starvation has a negative on all important behaviors and tolerance to unfavorable thermal conditions. That said, recovery is quite fast, and alternating conditions of starvation and resuming feeding mostly cancel these negative effects. 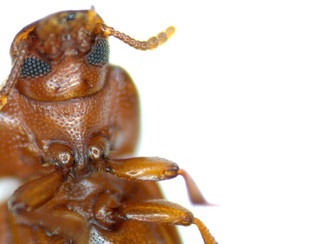 4. Ecology and behavior of desert vipers

The sand dunes of the northwestern Negev are home to a rich fauna. One of the common snakes on dunes is the desert horned viper, Cerastes cerastes. The viper uses one of three tactics to hunt prey, mostly rodents: A sequence of movement and ambush episodes, ambushing prey, and active search in which the viper enters burrows to search for rodents. In our study, we monitor the viper's population size, movement distances and tracks, and activity patterns. We currently focus on the viper's interaction with is common prey species, and specifically how do the vipers locate them and how does the prey avoid predation.

Manuscripts related to this project:
Subach A, Dorfman A, Avidov B, Domer A, Samocha Y, Scharf I (2022) Foraging behavior, habitat use, and population size of the desert horned viper in the Negev desert. Royal Society Open Science 9:220326. 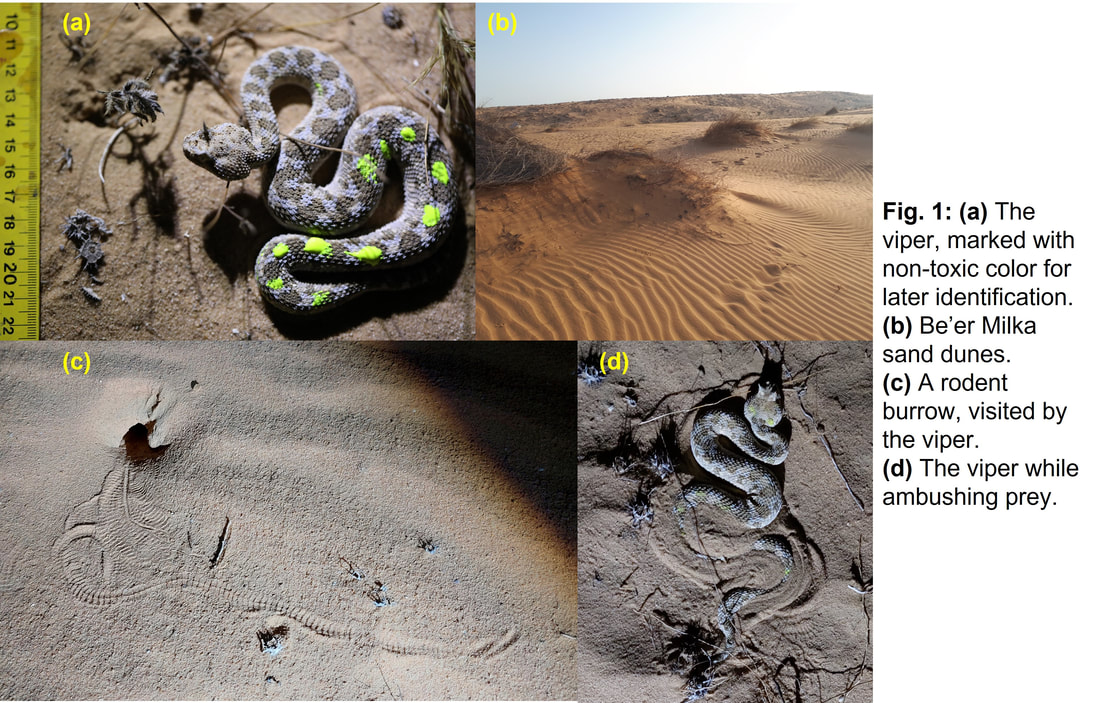